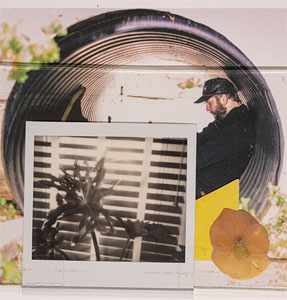 Join us in the shop on Wednesday August 7th at 6pm for an exclusive upfront playback of the the much anticipated new album from Bon Iver.
Entry is free.

What's more, if you pre-order the album you'll be eligible to receive an exclusive free Bon Iver flexi disc on the night.

NB: These flexis will be available only for attendees at the listening party & are being printed in VERY LIMITED quantities with multiple art variations.

Recording over a long time at April Base in Wisconsin but finishing at Sonic Ranch in Texas allowed us to feel confident, comfortable, and completely free of distraction. The sense of community around the record grew through honest, generous inspiration within the group of artists involved in the creative process of the record.

The sales and accolades are well-known - multiple Gold albums, multiple Grammys, chart-topping collaborations and festival headlines. But even more significantly, with each release Bon Iver quietly shifts the state of modern music. From the boundaries of folk, to the rules of autotune, to production work for others, Bon Iver’s fingerprint finds its way across the mainstream every time. Vernon has always been a master collaborator, and on ‘i,i’ that desire becomes maximal, with guests ranging from Moses Sumney and Bruce Hornsby to Wye Oak’s Jenn Wasner and the Brooklyn Youth Chorus. Here, the music - and band, and themes, and creative space - are bigger than ever.

February in West Texas. The light low and the days still warm and sweet. The air bright with red-tailed hawk and blue bunting, with the shink and rattle of the green jay. On a pecan ranch east of El Paso, its orchards running down to the Mexican border and the waters of the Rio Grande, a thrum of activity - song, saxophone, dancers, drums, guitar, synths; the sound of something taking shape. Here, 1500 miles from Wisconsin, from where this all began, a new season.

When Bon Iver released For Emma, Forever Ago in early 2008 it introduced Justin Vernon as one of the most gifted songwriters of his generation and revealed a sound that was distinct - tethered to time and to place, to a season of contemplation and the crisp, heart-strung isolation of a northern Winter. Its successor, the self-titled Bon Iver, Bon Iver, brought something more frenetic, the rise and whirr of burgeoning Spring, of hope and sap and movement. In 2016's 22, A Million, Vernon came to see something different again: "It was," he says, "our crazy energy Summer record." The band's fourth album, i,i, completes this cycle: a Fall record, Vernon says, autumn-coloured, ruminative, steeped.

"It feels very much like the most adult record, the most complete," says Bon Iver's Justin Vernon. "It feels like when you get through all this life, when the sun starts to set, and what happens is you start gaining perspective. And then you can put that perspective into more honest, generous work."

When sessions for i,i moved from April Base to Sonic Ranch, Bon Iver took full advantage of the facility, sometimes utilizing all five of the studio's live rooms simultaneously. "It allowed us to feel confident and comfortable, to be completely free of distraction," says Vernon of the move. "I don't think I left the property in six weeks. And in many ways the story of the album is the story of those six weeks rather than the almost six years of some of the songs."

The tenure at Sonic Ranch brought Vernon to a calmed creative state that he channeled into the heart of each song. Freed from the vocal distortion that once mirrored a period of fear and panic, he sings about the balance between the individual and the community, inspiration and creation. Vernon adds, "The title of the record can mean whatever it means to you or me. It can mean deciphering and bolstering one's identity. It can be how important the self is and how unimportant the self is, how we're all connected."

Barry says: Is there no end to JV's talents? He was the poster boy for brittle, morose hilltop acoutictronica for a good few years, and has seamlessly morphed into a modern take on the progressive chord structures and vocal layering of 70's rock or the percussive immediacy of 80's synthpop.

SIDE A
Yi
IMi
We
Holyfields
Hey, Ma
U (Man Like)
Naeem

SwansPublic Castration Is A Good Idea

Mick HarveySketches From The Book Of The Dead

The Order Of The 12Lore Of The Land

Various ArtistsCream Of The Crop 2022

The Focus GroupSketches And Spells

Various ArtistsSuburban Annihalation (The California Hardcore Explosion From The City To The Beach: 1978-1983)

Gold In The ShadeOver You / Shining Through

Peter BarclayI'm Not Your Toy

Index For Working MusikDragging The Needlework For The Kids At Uphole

The Brian Jonestown MassacreThe Future Is Your Past