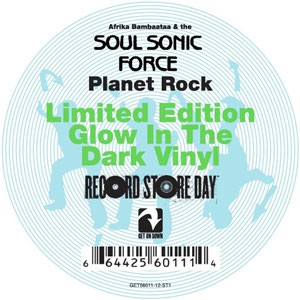 Afrika Bambaataa & Soul Sonic Force “Planet Rock” 12-inch re-issue on glow-in-the-dark vinyl (Limited edition of 1982 copies) B-Boy anthem from 1982 lights up any dancefloor…literally! First time ever on glow-in-the-dark vinyl! Fresh off Bambaataa’s historic donation of his vinyl collection to the Cornell University Hip-Hop Collection and the Fall 2014 “Renegades of Rhythm” tour by DJ Shadow & Cut Chemist celebrating his unparalleled contribution to hip-hop, Get On Down celebrates the song for which the Godfather of Hip-Hop is best known: 1982’s “Planet Rock,” a Kraftwerk-meets-Bronx-B-Boy anthem. Renowned the world over as a never-fail floor-filler, this new 12-inch pressing of the single is pressed on glow-in-the-dark vinyl for the first time ever. Although Bambaataa may have gotten top-billing on the release, it was a team effort, with crucial contributions by a team including DJ Jazzy Jay, Afrika Islam, Arthur Baker, John Robie, a Roland TR-808 drum machine (aka Planet Patrol) and of course MCs Mr. Biggs, G.L.O.B.E. and Pow Wow. This edition is housed in a clear, custom-embossed Get On Down poly-bag to let the glow show through.