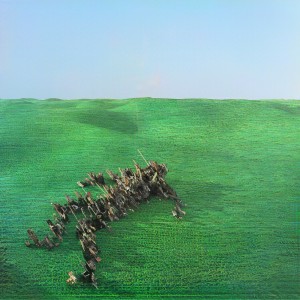 
If the album’s title conjures tranquil melodies evoking some misty pastoral idyll, that impression isn't immediately dispelled by the dark rock ambience of opener “Resolution Square”. That is abruptly followed, however, by a series of dystopian dreams strewn across a bed of staccato post punk-funk with more in common with The Fall, Gang Of Four and punk cacophony than Vivaldi. There isn’t necessarily a single coherent centre to the album, either musically or thematically, both subject matter and genre co-opted and discarded with abandon, but there is an obvious dig at cold corporate capitalism in “G.S.K.”, inspired by the monolithic slab that is GlaxoSmithKline’s HQ in Brentford and “Global Groove”, a swipe at the detachment of newscast war voyeurism. Alongside these Bright Green Fields presents clipped portraits of modern life’s grinding banality, but it really needs to be experienced as a whole to appreciate its exquisitely crafted and well targeted power.

Barry says: I can't think of a single band that sound like Squid. Four or five maybe, but no other single band could sound this varied, this coherently i'm sure of it. Meandering math-rock, snarling post-punk and arrythmic indie business coalesce into a wildly inventive and completely unique whole. Staggeringly brilliant.