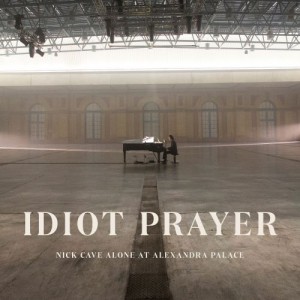 In June 2020, mid lockdown, Nick Cave performed a live set in the vast grandeur of in the West Hall of London's Alexandra Palace. The performance, featuring just Nick at the piano, was filmed and streamed in July and was a beautifully sombre affair that sat perfectly with the mood and uncertainty of the time.

In recent years Nick has performed several solo shows with just a piano, covering material spanning his entire career, but whether it is the shadow cast by the global pandemic or the majestic splendour of the location, this songs here seem somehow more poignant than ever. Although recorded in such a vast space it is the intimacy of the performance that makes it such a compelling listen. Wonderful.

The Guardian ****
"Cave’s performance in an empty hall, with just piano and voice, seems to try and ward off the terrifying silence of the Covid-19 age”

The Independent ****
"‘Idiot Prayer’ performance is stately and beautiful”

The Arts Desk ****
"The dramatic minimalism of this setting is perfect for an expressive face, and such powerfully emotional songs”

Barry says: There is absolutely no stopping Nick Cave. Even a global pandemic can't halt his transformative live show, and the bleak solemnity of one man and a piano only serves to exacerbate the intoxicating experience.

Spinning Song
Jubilee Street
Far From Me
Idiot Prayer
Sad Waters
He Wants You
Brompton Oratory
Higgs Boson Blues
Palaces Of Montezuma
Stranger Than Kindness
Into My Arms
Girl In Amber
The Ship Song
Man In The Moon
Nobody's Baby Now
Papa Won't Leave You, Henry
Black Hair
(Are You) The One That I’ve Been Waiting For?
Galleon Ship
Waiting For You
The Mercy Street
Euthanasia