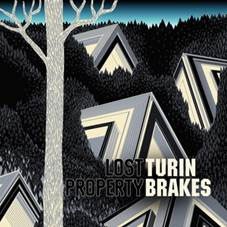 A collection of dispatches from the elusive side of reality that’s just a twist away from the everyday, Lost Property features the band’s trademark West-Coast acoustic guitar and widescreen harmony textures. Listen carefully beneath the lush, cinematic production the band created with co-conspirator Ali Staton (Madonna, La Roux) in the analogue world of Rockfields’ legendary studio; and you’ll hear other hints and stories, both hopeful and unsettling, resonating with unexpected echoes from your own life.

The record scales up from the intimacy of Martini, through the uneasy domesticity of Quiet Ones, the futuristic pulse of 96, the yearning gospel inflections of Save You hurtling towards the towering darkness of epic finale Black Rabbit. There’s the intimacy and warmth that Turin Brakes have taken along with them down the years, but this time reaching up towards something bigger, more epic in scope and darker in hue. It’s a sound yearning for the wide open spaces of the USA but rooted in the grimy streets of South London, still unique, still unforgettable.

How many pundits frantically casting their runes back in 1999 for predictions for the new millennium would have foreseen that Turin Brakes would be releasing their seventh studio album in 2016? Back then, they were hotly-tipped young ingénues, and we all know what usually happens to them in the heartless world of showbiz….While many of the rest of the class of 2000 seem forever frozen into the faces in their yearbook pictures, Turin Brakes are still making their way through the century’s changing landscape.