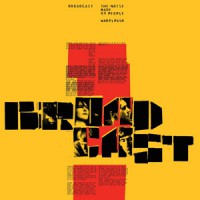 Vinyl re-press of debut album from Broadcast, originally released on Warp in 2000.

"After being mired in the studio for nearly three years, Broadcast returned with their first proper full-length album, The Noise Made by People, a collection of more shimmering, weightless pop that is nostalgic for yesterday's visions of the future but remains on the cutting edge of contemporary music. Where their early singles (collected on 1997's Work and Non-Work) painted small, quaint portraits of their retro-futurism, The Noise Made by People delivers their sound in widescreen, filmic grandeur. Richly layered yet airy pieces like the album bookends, "Long Was the Year" and "Dead the Long Year," seamlessly blend symphonic, electronic, and pop elements into smoky, evocative epics, while synth-based interludes such as "Minus One" and "The Tower of Our Tuning" present Broadcast's more detached, scientific side. Likewise, Trish Keenan's air-conditioned vocals sometime suggest a robotized Sandie Shaw or Cilla Black, but her humanity peeks out on "Come on Let's Go" and "Papercuts." "Echo's Answer" and "Until Then" are two of the other highlights from the album, which despite all of its chilly unearthliness, is a noise made by (very talented) people." - All Music.

Sara says: This record brings back very fond memories of first moving to South Manchester with my other half in the early 2000's. A lovely, whimsical, leftfield pop album by a unique band who are sadly missed.

Philippa says: Evocative and influential alt-pop from the year 2000. Broadcast's exotic blend of 60s pop, film soundtracks, psychedelia and avant noises can be heard in the music of Jane Weaver, Cate Le Bon, Charlie Hilton and many more.