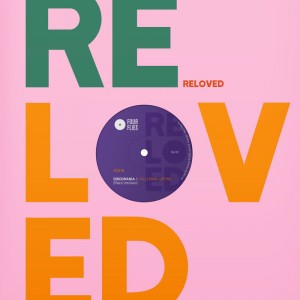 One of Piero Umiliani's most dancey tracks ever is finally available again on 12'' vinyl, both in its original version and in a special edit retouched by Jolly Mare that further increases its dancefloor potential.

Discomania was recorded by Umiliani in 1978 under the moniker Rovi (one of the many aliases he used at the time to avoid saturating the Italian library music market with his name), and sounds wonderfully in tune with the then-emerging cosmic disco scene, brimming as it is with Afro, disco and black music influences. In short, it was expressly conceived as music fit for the discos of the time (or the idea that Umiliani had of them). Moreover, Discomania enjoys a special place in Italian pop culture, having entered the collective imagination of national TV viewers between 1981-1987, when it was used as the closing theme song for RAI television football program 90° minuto.

This single launches RELOVED, a new series from Four Flies in which accomplished DJs and producers rework tunes from Italian golden age soundtracks and library music.

Choosing Piero Umiliani for the first release in the series was almost inevitable. Four Flies has devoted much of its archival music research and restoration efforts to the Florentine composer, contributing to expand his discography with two compilations featuring plenty of previously unreleased music (Studio Umiliani and L'Uomo Elettronico), as well as with various represses of seminal albums, the most recent of which is the library LP Paesaggi.

And who better than Jolly Mare, one of the label's greatest friends and collaborators, to put a contemporary spin on Umiliani's original track? As previously shown in Alessandro Alessandroni's Afro Discoteca Reworked and Giuliano Sorgini's Africa Oscura Reloved, the two records out of which the idea for this series was born, the Apulian DJ and music production wizard is perfectly at ease with reworking Afro-cosmic disco sounds.

Starting this autumn, future RELOVED releases will come in two different formats: special-edition 12-inches focussing on individual composers/themes, and 7-inches co-curated by Little Beat More and each containing a rework (on side A) and its original (on side B). The underlying aim is to give new life to absolute gems from the great but still relatively underrated legacy of Italian film and library music, launching them into the world of international clubbing.

The ReasonUp All Night EP