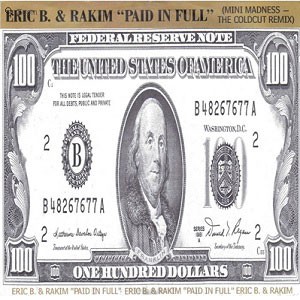 Available from Get on Down, we are proud to bring back this rare 7”, the UK Picture sleeve release of Eric B & Rakim’s Paid in Full (Mini Madness – The Coldcut Remix). When Eric B & Rakim debuted with Paid in Full in the summer of ‘87 the album was an immediate classic. By the time the cut "Paid in Full" was released as the album's fifth and final single, it became a hit in clubs, radio and MTV largely due to the songs remix. Enter Coldcut, a new DJ/Remix team from the U.K who at the time just made a big splash with a record of their own, the cut & paste classic “Say Kids What Time Is It”. It made such a huge buzz that Julian Palmer from Island Records urged them to do a remix of “Paid in Full”. The result was the “Mini Madness” mix which turned Rakim's one verse song into a magnum opus that that crossed cultures and influences into one seamless remix. Today it still holds as one of the most groundbreaking remixes ever, Rakim himself is even quoted as saying it was the “best remix” he has ever heard. What made this remix so special was how Coldcut incorporated several new elements in producing their remix, mainly the use of vocal samples. The most prominent in these samples was the addition of Israeli singer Ofra Haza, whose voice when lowered in pitch, synced perfectly with the Paid in Full breakbeat. Another notable element of the Coldcut remix is its opening vocal sample, "This is a journey into sound” which even today it is recognizable as the start of this Remix. "Now wait a minute, you better talk to my mother" comes from Humphrey Bogart and lines like "Pump up the volume" and "Dance to the record" are sampled from Eric B. & Rakim's own song "I Know You Got Soul". While there are many more vocal bits and breaks that go into what makes this remix so special, it’s better to let the music speak for itself.

Side A: Paid In Full (Mini Madness: The Coldcut Remix)
Side B: Eric B. On The Cut