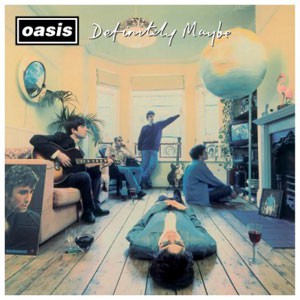 In their 14-year recording career Oasis sold over 70 million albums worldwide, had 22 consecutive UK Top 10 singles, 7 No.1 studio albums but, more than that, they helped define a generation. Now Big Brother Recordings are to reissue the band’s classic albums in chronological order as part of the new ‘Chasing The Sun’ series. Each album has been remastered and will be made available with rare and exclusive bonus content.

With 2014 marking the 20th anniversary of its original release, ‘Definitely Maybe’ will be the first reissue in the series. ‘(What’s The Story?) Morning Glory’ and ‘Be Here Now’ will follow later this year.

‘Definitely Maybe’ was originally released in August 1994 and was an immediate critical and commercial smash. The fastest selling debut album ever (at the time), it went seven-times platinum in the UK (over 2 million copies), and sold 5 million worldwide. Containing the classic debut single ‘Supersonic’ - released April 1994 - and subsequent singles ‘Shakermaker’, ‘Live Forever’ and ‘Cigarettes & Alcohol’, ‘Definitely Maybe’ frequently appears on Best Album Of All Time polls, including a No.1 placing in a 2008 Q Magazine poll of the Greatest British Albums.