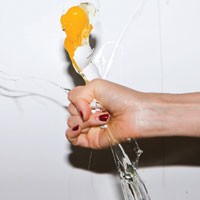 Very few things in life compare to the spine tingling, adrenalin rush that comes when you hear a great single for the first time, so I reckon the day the Yeah Yeah Yeahs walked into their record company, demanding that the opening track on “It's Blitz” should be “Zero” was, in general, a good day at the office for their A&R man. 'You want the best single of the year so far to be the first track on your album? Erm, yeah, I think we can probably live with that’. “It's Blitz” is no one hit wonder though. Awash with synths, it's an album of conflicts that finds Karen O at her most vulnerable while the band, with a sly wink to NYC disco, create what can only be described as an epic soundscape behind her. Yes, the guitars have (no doubt begrudgingly) conceded top billing to Nick Zinners vintage Arp but at its heart, “It’s Blitz” is still a great ROCK record.