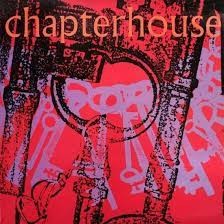 The British shoegaze band Chapterhouse released two albums during their existence, Whirlpool (1991) and Blood Music (1993). Blood Music spawned the single “She’s A Vision”, which was released during that same year and also appeared as a 12”, including three additional tracks. The 1993 EP She’s A Vision features two tracks from the album Blood Music, the title track and “Don’t Look Now”. In addition, the EP contains two mixes from that same album, including the mix of “Don’t Look Now” by The Drum Club, a popular dance duo based in the UK.