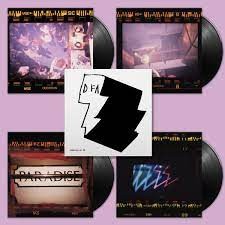 First time on vinyl, fully remastered and resequence by James and Bob Weston.

Behold, Compilation #2. A compendium what are arguably the best prime-era DFA cuts, mostly all recorded and/or remixed at the old DFA Studios on W. 13th Street (with some notable exceptions), released as 12-inches and then compiled onto a 3xCD set for convenience because, at the time, people actually bought CDs more than vinyl.

Now, in the spirit of time not really being much of a linear thing anymore, and for our own selfish desire to have this version of Liquid Liquid’s “Bellhead,” produced by the DFA, finally committed to wax, we have reverse engineered this thing back onto vinyl and presented it as a four-record boxed set.

We went back and found the master tapes or files for each song - a not insignificant effort given our habit of disorganization. We then rather painstakingly resequenced and remastered it with the guy we trust with such things: Bob Weston at Chicago Mastering Service. The lacquers Bob cut were plated and pressed at what we believe to be one of the best pressing plants in the country: QRP in Salina, Kansas.

We tell you all of this to say: we took this shit pretty seriously. Because we felt like it was important and because we felt like some folks would really appreciate it. It sounds remarkable. It looks great. (Rob Carmichael re-did the original packaging, adding a new photo from DFA OG Tim Saccenti from one of the original parties at W. 13th St.) Of course, we somehow can’t stop ourselves from making labeling errors - Pixeltan’s “That’s the Way I Like It” somehow escaped the center labels on the fourth record. It’s kind of the DFA curse. Has to be!