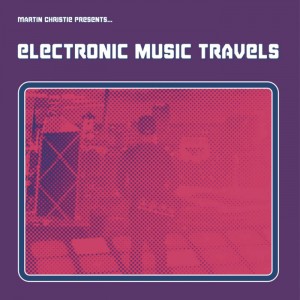 "The release of the Electronic Music Travels albums is an incredibly special moment for me in that it represents several years of friendships, collaboration, creativity and personal investment in the wonderful world of electronic music. I never imagined for a moment when I ran the first Electronic Music Open Mic (EMOM) in Manchester in early 2017 that it would lead to UK wide, European (and Australian) events, as well as a music travel book, CD compilations and a sexy vinyl release on an amazing emerging record label. All I wanted to do was have some fun with music in a space that was supportive and encouraging to everyone involved, those with ambitions plus those with no ambitions, people who enjoyed making music and wanted to test it out in a live environment. At that time there were very few places for electronic and experimental artists to meet up and play, there still aren’t enough, but at least the EMOM movement has contributed to making such spaces available.

When Electronic Music Travels (the book) was published via Werra Foxma Records in 2020 it sold out in just a few months. This was a massive surprise to me as I’ve grown so used to getting minimal interest in my art and music. I keep going because it’s in my bloodstream and I can’t help myself. It’s part of my DNA. Many of the people who bought the book were actively involved in the EMOM movement as organisers, performers and supporters. Many of those people were also mentioned in the book which gave a snapshot of grass roots electronic music making around the UK and beyond. For this reason it seemed natural to me that the money raised from the book sales should be used to fund something exciting for the community in the form of an exciting music release. A vinyl release was the obvious choice but in discussions with Frazer of Werra Foxma Records I soon appreciated the time limitations of this format. We opted for a vinyl release with complementary CD releases so we could cover as wide a range of artists as possible. The process of choosing the music to include from the many brilliant submissions was a tough one and sometimes led to some lively debates and communications. There simply wasn’t room for all the submissions to be included so we aimed to select previously unreleased material and give a sense of the amazing range of electronic and experimental music that is being made at this time. This we hoped would emulate a typical EMOM night where soundscape artists follow DJ sets, synth pop performers and modular enthusiasts. I truly believe we have achieved that great mix and that these releases represent a moment in time when fabulous music is being made and should be heard.

I’d like to say a big thank you to everyone who submitted music to these albums and to all the artists and supporters involved in the EMOM community. It’s amazing how new friendships and allegiances have been formed from the simple act of bringing people together in a live music setting. I’ve always tried to espouse the view that whatever happens this is not about one individual and what they do. It’s about what we all do to support each other and what we all bring to the table. That table is waiting for you on the stage of an EMOM night somewhere out there. Go and listen to what others are doing and let them listen to what you are doing and most of all have fun along the way. It makes our music travels so much more interesting.