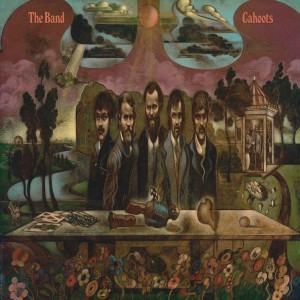 2021 marks the 50th anniversary of The Band’s fourth studio album, ‘Cahoots’. On December 3, Capitol/UMe will release the newly remixed and remastered album in variety of formats to celebrate this iconic and influential album.

‘Cahoots’ was the fourth studio album, and last album of original material for four years.

The front cover painted by New York artist/illustrator Gilbert Stone Back cover features a photograph portrait of the group by Richard Avedon.
Features guest vocals from Van Morrison (on “4% Pantomime”)

Life Is A Carnival
When I Paint My Masterpiece
Last Of The Blacksmiths
Where Do We Go From Here?
4% Pantomime
Shoot Out In Chinatown
The Moon Struck One
Thinkin’ Out Loud
Smoke Signal
Volcano
The River Hymn