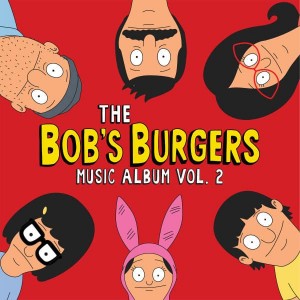 The second volume of music from the hit Fox TV show ‘Bob’s Burgers’. The Emmywinning, top-rated show was named one of the 60 Greatest TV Cartoons of All Time by TV Guide.

The ‘Bob’s Burgers’ audience is wide-ranging: strong performance with 15-25 year olds, median viewing age of 37, 35 share among males 35-54 and a 16 share of females in the same group.bCampaign will include promotion from the cast and show production team.
‘The Bob’s Burgers Music Album Vol. 2’ includes nearly every single musical morsel from Seasons 7 through 9.

For fans of the show, enjoying the music of Bob’s Burgers on its own is both an irresistible to-go bag and ultimately a world unto itself. Lose yourself in the strangely epic disco celebration ‘Hot Pants Rain Dance’, sing along with the musical theatre gem ‘The Wedding Is My Warzone’, or do whatever you’re gonna do to ‘Sexy Little Tiger’ but don’t miss ‘The Bob’s Burgers Music Album Vol. 2’.