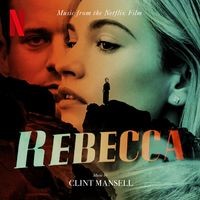 The psychological thriller - directed by Ben Wheatley and starring Lily James, Armie Hammer and Kristin Scott Thomas - aired on Netflix on October 21 - one of Netflix’s biggest films of 2020.

Speaking about his score, Mansell says: “Of course the main objective is to serve the film, support the story, and have the music play its role. But aside from that, to be honest, when I approach a new film nothing is sacred, everything is up for grabs. You need to take it apart and then rebuild it to find one’s own voice within it. That said I love to do lots of research on a project before I start writing - it’s my most favourite part of the process. The film I’m scoring has to inform me of what it needs, to what it will respond. So, an intimate knowledge of the work, other interpretations, background, the author, etc. is key to my being receptive to that.”

As well as being one of the founding members of Pop Will Eat Itself, Clint Mansell is one of the most respected contemporary film composers and his hugely successful works include Requiem For A Dream, Moon, The Fountain, Black Mirror: San Junipero, High- Rise, Doom and more.