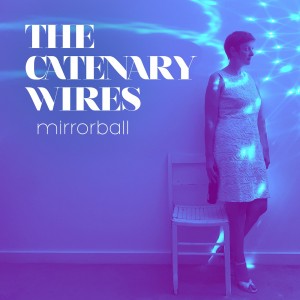 Mirrorball takes two lonely single people, and takes them for a night out to an 80s disco. Surrounded by divorcees and middle-aged drunks, will they be too shy to talk, or will they find some love action? This is definitely the most positive and the most romantic duet Amelia and Rob have ever released. With delicate – and not so delicate – musical tributes to the 80s, Mirrorball starts off sceptical, but ends up falling in love with the music of a decade that was pure, unsubtle, tasteless and synthetic. The 80s disco looks like hell, but turns out to be heaven on earth! In an earlier life, Amelia and Rob were in Talulah Gosh and Heavenly, and these bands are still popular: Damaged Goods recently released a compilation of Heavenly singles, which created fresh interest. The Catenary Wires started as a duo, but are a full band now, and this record really feels the benefit of inspired contributions from Fay Hallam (keyboard), Ian Button (drums) and Andy Lewis (bass).

Andy is also the producer. Fresh from recent success with Louis Phillippe and The Night Mail, he brings real verve and sophistication to Mirrorball. It’s a song that will be heard on many indie radio stations and dancefloors, and has the potential to be played more widely. The single will be supported by a new video – set in an 80s disco, of course. There will also be a special online 80s disco party, arranged in conjunction with popular club night How Does It Feel. Friends of the band and indie luminaries will be invited to choose the 80s song they dread the most - and the one they love the most - to create the perfect soundtrack to launch the new single. Fllipside I Wish You Were Here Now (exclusive to this single) is intense and poignant - more like previous Catenary Wires releases – and features Amelia signing a heart-rending lament, attempting to make sense of loss and unexpected departures. The songs’ range of tones is a perfect advert for the new Catenary Wires album, which will released by Skep Wax in May 2021.