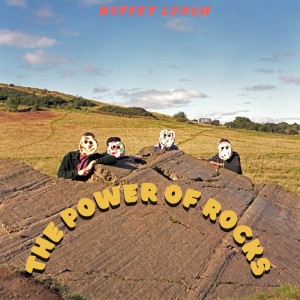 These four ricochet between Glasgow and Edinburgh, creating music that bristles with DIY spirit and upbeat wonkiness. Their tracks are vigorous excursions, meandering into clattersome terrain as often as hiking up into the breezy, melodious foothills.The desire to lead the listener along a curious tale helps tie things together, showcasing a lyrical playfulness that pins down their puzzle of sound.

Having been an active band for a few years, playing regularly north of the border with like-minds such as Irma Vep, Robert Sotelo and Kaputt, Buffet Lunch spent early 2020 working on the follow-up to their two EPs on Permanent Slump.The fruits from such labour bore out as the band’s debut album ‘ThePower of Rocks’, out may 7th on Upset The Rhythm.

‘ThePower of Rocks’ was recorded in a Crofters cottage/studio on the banks of Upper Loch Fyne in Argyll, over four nights and five days at the beginning of March 2020, before Covid-19 made itself such an ongoing concern. Back then four people could occupy the same space and make music, lunch and dinner together. Days fell into a pattern of long sessions and long meals.The album came together as a luminous mix of Buffet Lunch’s live chestnuts, some sparky recent songs and some new material entirely written and recorded in situ. All tracks were recorded by Neil Robinson acting as the in-house engineer.

As the seriousness of the virus and talk of national lockdowns developed - there was a feeling of anticipation more than fear in the air, but being holed up in cottage in a wild corner of Scotland surrounded by snowy mountains still took on an apocalyptic feel, albeit an apocalypse where the band were safe and overdubbing vocals. After leaving the cottage, reality (as it must) set in and finishing the album became a more remote task.

Over the following months, an extended period of listening awarded the recordings a deeper realisation, as they bounced between band members computers. Perry also started writing on his Casio keyboard and collaborated on a couple of songs (‘Ten Times’ & ‘Ashley’s New Haircut’) with Jayne Dent (of electronic music project Me Lost Me), drawing on her ethereal singing voice as a counterpoint to his own more ‘spoken’ vocals on the album. These gauzy, dreamlike tracks were then sent to other members of Buffet Lunch to add their respective parts, creating evocative new dimensions to close each half of the album with.

The Power of Rocks’ rattles along like a short-story collection, exploring a variety of narratives. When it comes to the music itself, Perry describes their approach as “see what happens” but admits to a preference for simple synth melodies, plenty of percussion, and prickly guitar-parts. ‘Red Apple’ opens the album with a dizzy swagger, guitars and keyboard notes swirling in forays whilst its lyric tackles notions of social bravado. ‘Orange Peel’ follows equally serpentine with its blattering tune and jagged, yet jolly melodic twists.The themes across the album are wide-ranging and personal, from irritation with out of touch politicians (‘Pebbledash’), to love letters to seaside living (‘Bladderwrack’), to even the frailty and confusion of old age (‘Said Bernie’, ‘It Helps to Know’). Title track ‘ThePower of Rocks’ is an ode to the power of nature sunk within a rolling wave of cheery jangle. “Do you believe in the power of rocks when the sun is too hot on your face?” sings Perry as the song zigzags with consequence. ‘He Wore Two Hats’ sports similarly bop-worthy riffs and addictive nods as it deals with its story of savvy man who’d bitten off more than he could chew.

Buffet Lunch’s debut album accomplishes a lot in its brief 38 minutes. It stuns and startles, intrigues and entwines, drawing the listener further into its characterful world. When asked about any intent posed with this debut record Perry confides that “we hope people can hear the joy the band had making the album and the curiosity and frustration that went into the writing. There was no process or design, but there is detail, and deliberateness in our wish to explore and create.” It’s this attentive focus alongside a keen sense of humour that really sets Buffet Lunch apart, with ideas darting wilfully to and from the poignant truths at hand.