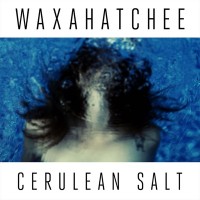 Reissue of the second Waxahatchee album.

On this new record, Crutchfield’s songs continue to be marked by her sharp, hooky songwriting; her striking voice and lyrics that simultaneously seem hyper-personal yet relentlessly relatable, teetering between endearingly nostaglic and depressingly dark. But whereas before the thematic focus of her songcraft was on break ups and passive-aggressive crushing, this record reflects on her family and Alabama upbringing. And whereas American Weekend was mostly just Crutchfield and her guitar, Cerulean Salt is occasionally amped up, with a full band and higher-fi production. At times, Cerulean Salt creeps closer to the sound of PS Eliot: moody, 90s-inspired rock backed by Keith Spencer and Swearin’ guitarist Kyle Gilbride on drums and bass. The full band means fleshed-out fuzzy lead guitars on “Coast to Coast”, its poppy hook almost masking its dark lyrics. Big distorted guitars and deep steady drums mark songs like “Misery over Dispute” and “Waiting”. There’s plenty of American Weekend’s instrospection and minimalism to be found, though. “Blue Pt. II” is stripped down, Crutchfield and her sister Alison (of Swearin’) singing in harmony with deadpan vox. She’s still an open booking, musing on self-doubt versus self-reliance, transience versus permanence. “Peace and Quiet” ebbs and flows from moody, minimal verses to a sing-song chorus. “Swan Dive” tackles nostalgia, transience, indifference, regret over the a minimal strum of an electric-guitar, the picking at a chirpy riff and the double-time tapping of a muted drum. The album closes with a haunting acoustic-guitar reflection on “You’re Damaged,” possibly the best Waxahatchee song to date.

ColdplayEvery Teardrop Is A Waterfall