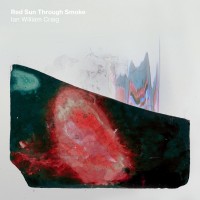 Vancouver-based singer/composer Ian William Craig returns with a brilliant and powerfully emotive new album. His first for a long while to be centred around the piano - and also one of his most pared back - the record was made through an intense period of personal loss and environmental catastrophe.

‘Red Sun Through Smoke’ was recorded over two cataclysmic weeks in August 2018 in Kelowna, whilst the city was encircled by the forest fires which, under a warming climate, now regularly rage through British Columbia in summertime. With smoke engulfing the landscape, it was recorded from start to finish in the living room of a small house owned by his grandfather, who was moved into palliative care and tragically died halfway through the recording, his lungs filled with fluid as a result of the smoke.

Forged in trauma and an intense, bewildering slew of mixed emotions, Ian William Craig has created an album of incredible beauty, sadness and depth. ‘Red Sun Through Smoke’ is a profoundly moving album, a standout record in a prolific body of work that shows no sign of faltering.