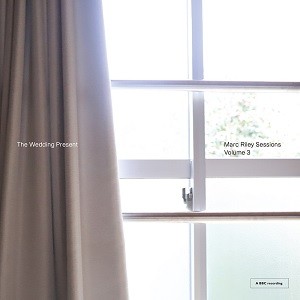 A band with a history that’s inextricably intertwined with the BBC and in particular the late BBC DJ John Peel, an early champion of the band, the ‘Marc Riley Sessions’ series echoes the famous Peel/Selwood releases on the Strange Fruit label that included BBC sessions from the likes of New Order, Buzzcocks, The Cure and Echo & The Bunnymen.

An avid Wedding Present fan himself, Riley, with his team of producers, has formed a close bond with The Wedding Present’s David Gedge and the band. “The release of the Wedding Present sessions done for our 6 Music programme over the years is something of an honour. In the great tradition of the Peel / Selwood releases on the Strange Fruit label, this record proves that, even without John, the BBC can still be a place where great bands can continue to grow and be creative... amongst friends.”

Having received critical acclaim for releases 1 and 2, ‘Marc Riley Sessions Volume 3’, features 9 tracks recorded for the awardwinning BBC Radio 6 Music show in 2015 and 2016. “The two sessions on this compilation feature many songs that appear on ‘Going, Going...’ the studio album that The Wedding Present released in 2016. ‘Going, Going...’ itself was an extensive audio-visual project recorded over the space of eighteen months in Provence, Liverpool and Seattle. By the time of the 2016 session, however, the album had been completed and had actually been released the previous week. Consequently, The Wedding Present were touring the UK (playing ‘Going, Going...’ in its entirety) and so, in-between our Cardiff and Gateshead concerts, we stopped off in Salford to record some tracks for Marc. As a result, you can hear the ‘live’ feel in these performances. This was a band that was literally on the road!”, says David.

The album also features two glorious cover versions including a heartfelt cover of the theme music from the fifth James Bond film, ‘You Only Live Twice’. “I’ve always been fond of recording cover versions and there a couple of great ones on this LP. In 2015 we had a go at John Barry and Leslie Bricusse’s ‘You Only Live Twice’ - and enjoyed it so much that I’m now planning a compilation of Bond covers to be released on my label, Scopitones”, says David. The second cover is the off-kilter ‘Jumper Clown’, a Marc Riley composition. “Marc’s band The Creepers released this song – which poked fun at his previous band’s singer [Mark E. Smith from The Fall] – in 1983 and The Wedding Present covered it eleven years later for the B-side of our ‘It’s A Gas’ single. We decided that an unannounced rendering for a live session while Marc himself was sat in the room watching would be a great surprise to spring on our DJ pal. We managed to keep the whole thing secret with the help of the show’s producer Michelle. This involved hastily rehearsing and sound-checking the song whenever we got the nod from the recording engineer that Marc was out of earshot!”, says David.