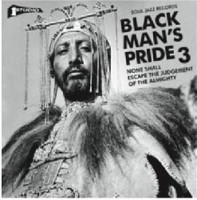 This is the latest installment of Soul Jazz Records’ on-going collection of Rastafarian music at Studio One, featuring classic material from legendary roots and culture artists The Gladiators, Horace Andy, Freddie McGregor, Sugar Minott and the Wailing Souls, alongside a superb selection of rarities from Sir Coxsone’s musical empire made up of one-off and practically unknown Rastafarian artists who recorded on myriad Studio One off-shoot labels in the 1970s - The Manchesters, Mellodies, The Nightingales and others.

In this new collection, we see that once again the prescient Clement Dodd was a man who saw the wider picture. In the 1960s it was Sir Coxsone who identified the creative potential of The Wailers, Toots and the Maytals, Heptones, Burning Spear and many, many others. In the 1970s Studio One released an untouchable selection of the finest as styles moved from reggae to deejay to dub and, in the latter half, the emergence of dancehall.

What is also clear is that throughout this era Studio One released an incredible amount of roots music and not just the most commercially obvious. For alongside the career-building catalogues of Burning Spear, The Wailing Souls, The Gladiators and so on, one needs to be an ardent Studio One collector to know some of the truly raw Rastafarian music featured here. Groups such as The Manchesters or The Nightingales feel as if they were recorded straight out of the churchical chants of the mansions.

Black Man’s Pride explains the links between the ideology of Clement Dodd at Studio One and the Rastafarian faith, which was the creation of Afro-Jamaicans and concerned above all else with a black consciousness and empowerment, a rediscovering of the personal and racial identity of black people. The movement began in the 1930s and, in tandem with this black consciousness, called for a rejection of the British imperial culture that dominated Jamaica, while creating an identity based on a re-appropriation of an African heritage.

The Rastafari movement was like a pivot, bringing together and balancing many vectors of ideologies. Marcus Garvey’s Back to Africa movement, trades union discourse, anti-colonialism and nation independence, maroon self-definition and independence, the spirit of African rebellion in the Caribbean. For Clement Dodd, a black man and producer growing up in Kingston in this era, Rastafari was simply a part of his everyday world - from witnessing Count Ossie’s grounations to the faith of many Jamaican artists at Studio One - from the Skatalites onwards.

Featured here alongside these classic and rare tracks from Studio One are new and extensive sleeve notes with track-by-track notes by Rob Chapman, author of the acclaimed Downbeat Special and Never Grow Old Studio One books.