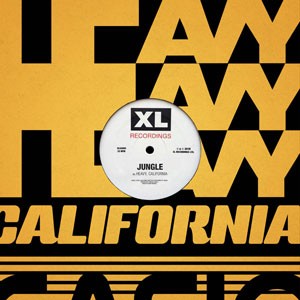 New single by London based soul collective, Jungle. Radiant, shimmering and golden voiced, their songs possess a catchy, mainstream appeal yet are light years ahead of the pop market - with technologically advanced production galvanzing much of their tunes in much the same way The XX seems like love songs beams from the future.

"Heavy, California" and "Cherry" epitomizes this ethos, with the former quicker paced and primed for excitement singing about the graces of the Golden State while the latter is slower, playful and tantric, with Lloyd-Watson & McFarland's delicate falsetto sounding in fine form. Killer stuff from one of the hottest acts on the scene right now.

Millie says: We’ve being spoilt here by Jungle, another release!! We’re all in anticipation for the new album ‘For Ever’ due out next month. They are a Piccadilly favourite here, catchy and drenched in synth drops to die for. So good.