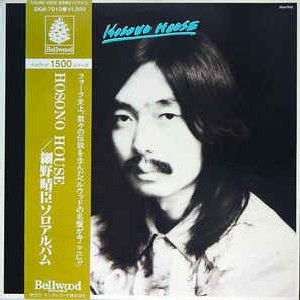 The unbelievably prolific Haruomi Hosono is one of the major architects of modern Japanese pop music. With his encyclopedic knowledge of music and boundless curiosity for new sounds, Hosono is the auteur of his own idiosyncratic musical world, putting his unmistakable stamp on hundreds of recordings as an artist, session player, songwriter and producer.

Hosono House is debut solo album by Japanese musician Hosono, released on May 25, 1973. Besides Hosono, this album also features performances by the group "Caramel Mama" (featuring Hosono's fellow Happy End member Shigeru Suzuki). Hosono wanted to emulate The Band's Music from Big Pink and James Taylor's One Man Dog. With this album, recording equipment technology had evolved enough for domestic recordings of good quality to be feasible, and going to the center of the city to reach a recording studio was somewhat inconvenient. The album was recorded for five hours every afternoon in a 144 square foot large bedroom in Hosono's residence in Sayama, Japan (with a 16-track mixing console in his living room). The instruments were recorded unprocessed from the amplifiers in a small room, leading to the album's unique sound. Hosono continued to develop the tropical style of Hosono House in his following works, Tropical Dandy and Bon Voyage co..