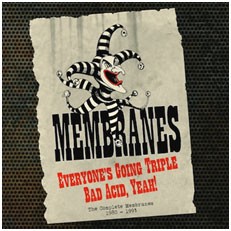 Seminal Blackpool post-punk band’s entire early discography in one box set. The Membranes came to embody a style of abrasive, off-kilter post-punk music which might best be described by the motto “Death To Trad Rock” (later the title of a book and compilation CD by head Membrane John Robb). They have influenced a vast range of bands across the world, attracting heavy fans such as Big Black (Steve Albini), Sonic Youth, Pussy Galore and Butthole Surfers. The Membranes are the first band that Steve Albini worked with outside Big Black. Includes their five albums recorded for various labels across the 1980s (on Criminal Damage, Creation, Constrictor, In Tape, etc.) as well as all their singles, B-sides, EPs and extra tracks. Boasts a mere 99 tracks, most of which appear on CD for the first time, from their contribution to the Blackpool Rox EP in 1980 right through to their final recordings for the band’s original incarnation in the early 1990s. 26 page booklet includes sleeve-notes written by John Robb (now an established author and journalist, behind the Louder Than War magazine), alongside a wealth of visual material. After an extended hiatus began in the early 90s, the band reformed in 2012 and released their first new album in 20 years, “Dark Matter/Dark Energy” on Cherry Red in 2015 (CDBRED661).A brand new Membranes album is due out on Cherry Red in autumn 2017