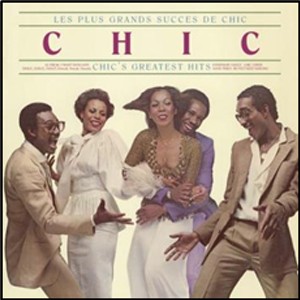 Let's face it, Chic were THE greatest band of the disco era. By the time they sauntered onto the late 70s stage, the genre was already slipping into the excess which eventually caused its downfall. Out of nowhere, Chic bucked the trend and turned the dancefloor around by stripping the disco sound down to its basic elements. Sizzling 4/4 rhythms, Bernard's limber bass and Nile's distinctive guitar licks fused into killer arrangements and topped with Norma, Luci and Alfa's powerhouse vocals. This distinctive approach not only resulted in some of the finest dance singles of their time, but also helped create a template for urban funk, dance-pop, and even hip-hop in the post-disco era. Taking a quick squiz at the tracklist you'll find every essential Chic cut back to back, resulting in a total party starter of an LP. I defy anyone to find a record with seven better tracks.

Patrick says: Yowser yowser yowser! How about this for an LP! Unrivaled in the big room disco world, Chic were a party starting powerhouse – and this LP shows you exactly why. All killer, no hint of a filler.