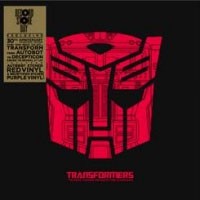 Marking the 30th Anniversary of the Original Motion Picture Soundtrack to Transformers The Movie comes this collector's edition, double vinyl package including two etched, coloured vinyl LPs in a Transforming gatefold sleeve. LP1 is pressed on red vinyl and etched with the Autobot logo, while LP2 is pressed on purple vinyl and etched with the Decepticon logo. The gatefold sleeve completely "transforms" all four sides from an Autobot themed jacket to a Decepticon themed jacket. This original 1986 cult classic, remastered and re-imagined, has never sounded or looked better! Transformers, There's More Than Meets The Eye!