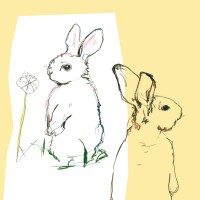 “The biggest thing ever to happen to indie pop in America... Most of what's written about this band is all about that sweet pop and those childish affectations, but that misses the substance at the core: Their music was dark, damaged, full of fright and sex and death and vulnerability-- just like any real childhood...their hopscotch stories felt punker than Black Flag tattoos ever could.” - Nitsuh Abebe, Pitchfork

Exploding the teenage underground into passionate revolt against the corporate ogre since 1983, Beat Happening formed at Evergreen College in Olympia, Washington by Calvin Johnson, Heather Lewis and Bret Lunsford. The band combined a modern primitive pop sound with the D.I.Y. ethos of ‘anyone can do it’ and inspired countless bands and labels along the way. The music community that arose around the band and their label, K, may have seemed the sonic antithesis of their Seattle neighbors (and friends) but was no less influential.

The legend of Beat Happening, and of K, the label that Calvin Johnson founded, is full of big names they worked with before they were stars (Beck! Modest Mouse! The Gossip!), and big names they influenced (Kurt Cobain! Sleater-Kinney!) Less acknowledged, however, is that Bret Lunsford, Heather Lewis, and Calvin Johnson created some of the most original and surprising music to come out of the often deliberately weird American punk rock tradition. Working from a sonic template of the Cramps, Trouble Funk, Young Marble Giants, and messianic blues, Beat Happening confounded and often incited violence from audiences weaned on hardcore punk. In the place of macho aggression, Beat Happening confronted the all-ages scene with Heather’s low-key delivery and Calvin’s fey theatrics, topped off by his trademark dance move: rubbing his tummy. For a supposedly cutesy band, Beat Happening was adamant about asserting its right to exist, carrying itself with a punk as fuck attitude that would become a key inspirational lodestone for the generation of D.I.Y. bands that followed, including Bikini Kill and the Nation of Ulysses.

30 years since the release of their self-titled debut album, Look Around is a remastered, career-spanning double album anthology, handpicked by the band and a great starting point for the uninitiated as well a refreshing reminder to those who caught the wave the first time around. The 23 tracks range from their 1984 debut single, “Our Secret” b/w “What’s Important” (originally sold directly for $2.50 to individuals, but $4 to institutions) to “Angel Gone,” a single released in 2000 after eight years of inactivity.

Side A:
Our Secret
Foggy Eyes
Bad Seeds
What’s Important
Look Around
Bewitched
In Between

Side B:
Indian Summer
Other Side
Black Candy
Cast A Shadow
Nancy Sin
Knock On Any Door
Left Behind