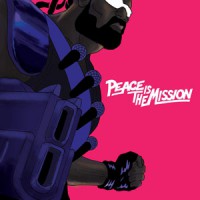 It's hard to think of another artist who has their feet firmly planted across as many styles as the Mad Decent founder, head honcho and brand ambassador, Diplo. Equally immersed in Top 40 and hip-hop world as he is in underground club, indie rock and world music, the Grammy-nominated producer is embarking on his most ambitious year yet with not just the launch of the new Major Lazer cartoon on FXX, but also the release of a new Major Lazer album, 'Peace Is The Mission'. This will be the third studio album from Major Lazer, the dancehall collective spearheaded by Diplo with trusted co-conspirators Walshy Fire and Jillionaire.

When Major Lazer first launched in 2008, tastemakers embraced the indie side project and niche underground media outlets championed the sound. Seven years later, Major Lazer have developed their sound to become integrated with pop music and beyond and continued their ascent, recognised by their peers, fans and media around the world as leaders in a genre they helped to build.