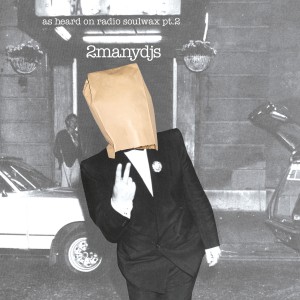 In the first two decades of the 21st century, few have controlled the cultural weather quite like Stephen and David Dewaele. The Dewaeles are familiar to millions as 2manydjs, a project which undoubtedly moved the needle for modern DJing. In 2002, after a string of creative broadcasts on radio while still known primarily as a rock band, they released As Heard On Radio Soulwax Pt. 2.

This was a mix so giddy, creative, genre-blurring and downright fun that it could only be considered equal to a full-length album – which is exactly what happened, tallying Album of the Year and Album of the Decade accolades from the likes of The New York Times, Spin, The Face, Pitchfork and more, and shifting over half a million copies globally.

The Belgian brothers-in-arms are also known to many as electronic/indie rock band Soulwax, the adored group whose combination of rock, rave and gleaming white suits has proved irresistible to record buyers and festival-goers from the 1990s to the present day.

Alongside like-minded allies such as Erol Alkan, Tiga and Jacques lu Cont, 2manydjs swept dancefloors into delirium, gifting a rock ‘n’ roll attitude to club culture. With As Heard On Radio Soulwax Pt. 2 as their genre-blurring calling card, the Dewaeles’ unique style managed to be deeply credible and hugely scalable, propelling the brothers to dance music’s summit, a vantage point from which they never came back down.

Matt says: I’m not joking. In 2002 (the year this was released), this was THE mixtape to be seen with. Period. Infact, your very success with the opposite / same sex depended largely on whether you had this (at the time) bootleg CD-R in your collection. It got hammered so much we all knew the tracklist and running order off by heart. It introduced us then-teenagers to the joys of the mash-up, and propelled a then-burgeoning David and Stephen Dewaele into the ears of the youth, the dancefloors of the (young) adults, and the columns of the hottest music press at the time. It was and still is quite a phenomenal landmark in music culture. Referenced a million times over and played even more so.

I’ve never seen it on vinyl. Ever. Whether that’s my own ignorance, turning my back on my teenage dreams as I matured into adulthood or, as it happens, it’s actually quite rare! (it’s the latter – I just checked at the 2012 press goes for about £200!).

It’s still the ultimate soundtrack to get ready for your Saturday night. Capturing that youthful energy and hitting us with hit after hit presented in the most unusual and infectious ways. Unfortunately it’s unlikely to piss yer parents off as much as it did in 2002 cos they probably already know it!