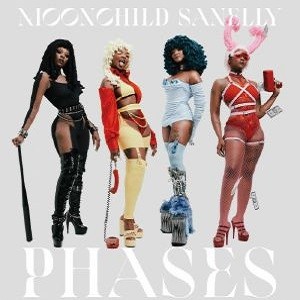 The trailblazing South African musician Moonchild Sanelly - real name Sanelisiwe Twisha - signed to Transgressive Records in 2020, kicking off with diverse mini-LP Nüdes. Now, she returns to the international label with her genre-crossing second album Phases. Forming a sonic foundation that veers between Amapiano, Gqom, grime, pop, house and R&B while showcasing her vocal talents on more downtempo songs, Phases 19-tracks document the varying chapters of a toxic relationship and subsequent freedom. A double album, the first side is a journey through the relationship with production reflecting those different moods and aspects of her personality; the second side, meanwhile, leads into a clubbier amapiano space. Collaboration has always been core to Moonchild’s alternate world.

Since her 2015-released award-winning first album Rabulpha! put her on the global map, she has collaborated with local favourites Maphorisa, Sho Madjozi and Thandiswa Mazwai. In the years that followed, she caught the attention of a host of international superstars, leading to high-profile collaborations with artists including Wizkid, Beyonce (featuring on “My Power”) and Gorillaz (on “With Love To An Ex”). Phases is a highly collaborative record, too, with production and guest features from Sad Night Dynamite (their track “Demon” is already a huge hit), Wesley Joseph, Xavier Thomas (Débruit), TOKiMONSTA, Holly and Aramboa.

The album’s title takes on a multitude of meanings: via the range of genres covered across its runtime, the different sounds and styles that it encompasses and the personal journey that Sanelisiwe Twisha has taken to get to this point. But, for Moonchild Sanelly, it’s more literal than that: “I think that, with this album, I’ve managed to piece all the different parts of me together, because I’m known for different things in different parts of the world. I think you get to know me better with Phases - all the different sides of me.”