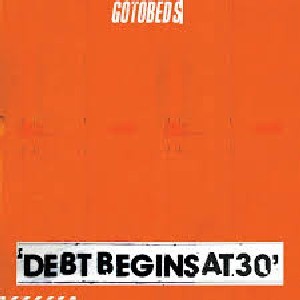 Give me a minute or three to extol the virtues of The Gotobeds, the modern rock and roll sensation that has always sounded like they love to play. Never maligned by having the world’s weight on their backs, The Gotobeds - Cary, TFP, Eli and Gavin - return to the fray with their third full lengther, ‘Debt Begins at 30’. The esprit de corps and anxiety-free joy that permeates their other LPs and EPs remains intact. The octane is high-test, the engine still has knocks and pings and the battery is overcharged. The Gotobeds - as Pittsburgh as it gets, the folk music of the Steel City - have more tar for us to swallow.

‘Debt Begins At 30’ is an old-fashioned blast furnace and the liquid iron flows. ‘Debt Begins At 30’ is not ‘pub sop’ in any way or shape. Though I never considered The Gotobeds a band that needed assistance from their peers, ‘Debt Begins At 30’ features outside contributors on every track. The album’s first single, ‘Calquer The Hound’, includes local buddy Evan Richards, and Rob Henry of Kim Phuc. ‘Calquer The Hound’ has euphony, a sly bridge, plenty of trademark bash, and a spacey outro. It’s a sanguine album opener, more Al Oliver than Starling Marte. On ‘Twin Cities’, the lads tap Tracy Wilson, formerly of Dahlia Seed and currently of Positive NO!, to share the vox, and the result is an exuberant pop song proving The Gotobeds benefit from women ruling the scene.

"Twin Cities" is more Dakota Staton than Don Caballero. ‘Debt Begins At 30’, the title trackular, includes the wizardry of Mike Seamans and legend Bob Weston. It’s a brooding romp with tribal beats and slash-and-burn guitar, more Rocky Bleier than Le’Veon Bell. Unsurprisingly, The Gotobeds called partners-in-rock-crime Protomartyr a coupla times, with Joe Casey bolstering ‘Slang Words’ and hook-fiend Greg Ahee shredding on ‘On Loan’. ‘Slang Words’ is a savory wrecking ball with a crunching bite, more of a soft shell crab sandwich from Wholey’s Market than a 4am slop feast at Primanti Brothers. ‘On Loan’ is an anthemic janglefest with high-arcing fret work, more Karl Hendricks (rest his soul) than ‘Weird Paul’ Petroskey. Silkworm guitarist Tim Midyett is tapped on ‘Parallel’, a grand song that enters a world of whimsy, melodic and uncomplicated, more Jaromir Jagr than Sidney Crosby.

The likes of 12XU label boss Gerard Cosloy, Tre Orsi’s Matt Barnhart, the wonderful Victoria Ruiz of Downtown Boys, Pittsburgh wordsmiths Jason Baldinger and Scott MacIntyre, and yours truly strut stuff on other tracks. In my case, I just scream “dross” on ‘Dross’ several times. Good judgment on the part of The Gotobeds to know that’s the best I can do, more Max Moroff than Andrew McCutchen. Anyways, The Gotobeds have quickly reached the veteran stage, but, based upon ‘Debt Begins At 30’, their best days are ahead of them. It’s a pleasure to be associated with such an excellent band.”