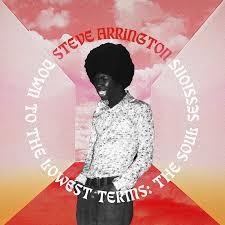 After a 7-year hiatus, funk legend Steve Arrington returns with his uplifting and soulful new album ‘Down To The Lowest Terms: The Soul Sessions’, with artists including Mndsgn, Knxwledge and Jerry Paper on production. The album portrays his diversity of influences, which sees Arrington drawing on funk, soul, jazz, electronic and R&B.

Steve Arrington is known for his innovative vocals on classics including ‘Watching You’ and ‘Just A Touch of Love’, with Slave, as well as his solo work with tracks including ‘Dancin’ in the Key of Life’, ‘Weak at the Knees’ and ‘Nobody Can Be You’. His music has greatly influenced the hip hop generation, having been sampled by Jay-Z, A Tribe Called Quest, Pharrell, 50 Cent, 2Pac, De La Soul, Snoop Dogg and many more.

‘Down To The Lowest Terms: The Soul Sessions’ is Steve Arrington’s first solo album since 2009’s ‘Pure Thang’.

Arrington’s recent collaboration with Thundercat on the single ‘Black Qualls’, for his album ‘It Is What It Is’, was added to the BBC 6 Music A-List and performed live on Jimmy Kimmel. Arrington’s latest release was the collaboration ‘Higher’ with Dam-Funk in 2013, praised by Pitchfork, Exclaim! and more.

Matt says: Rich in authentic, old school, proper FUNK; this one should appeal to fans of George Clinton's many projects as well as any newer modern funk devotees coming from the PPU, Star Creature angle. TIP!