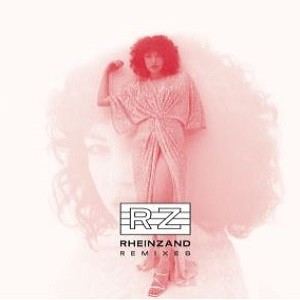 Released in 2020, Rheinzand’s self-titled debut LP heralded an authentic vibe of retro-futuristic disco-pop, distinguishing themselves in the current climate of dance music. The album was met with acclaim, picked by Piccadilly Records as their nr. 1 album of the year. Since, the material on that album have proven fertile ground for practitioners in the art of the remix. On this EP, we release a selection of those efforts.

On the first slot, we have Running Back label owner and longstanding DJ heavyweight Gerd Janson polishing off his house music fluency with a gleaming take on ‘Blind’. The swerving vocals of Charlotte Caluwaerts’ reverberate through space ray arpeggiators and burnished drum gates.
Belgian compatriot Blitzzega, the neon-drenched moniker of composer Bjorn Eriksson, features with a dizzyingly switched-on version of ‘Mi Mundo’, sporting gnawing synths and hijacked funk licks.

Next, dub-pop wizards Peaking Lights serve up a heady brew of plugged-up melodies braided around Reinhard and Charlotte’s shuffling vocals. This remix blends the magenta glow of synthwave with the deep grooves of maybe late Theo Parrish. We round off the EP with a treat form Dennis ‘Citizen’ Kane, the iconic dance music figure who emerged in mid-90s NYC downtown scene. A veteran DJ and disco-head, Kane applies a luminous hand to Rheinzand’s ’14 Again’, deepening the vibe of kittenish mystery through carefully layered work of phasing drones, wandering synths, and mushrooming rhythm section (think T-Connection).

Mine says: After the success of the first remix EP we'll again be stocking an exclusive 12" by our album of the year winners Rheinzand, this time featuring remixes by Running Back mastermind Gerd Janson and shop favourites Peaking Lights. LUSH!