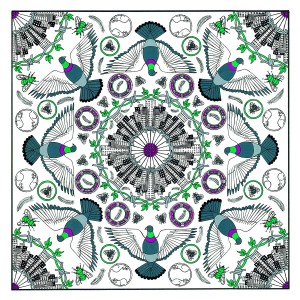 The city and the country both have distinct, vibrant energies - but there’s something happening in between, too. As factories give way to fields, and highways drift into gravelly roads, the friction can be palpable, the aura electric. The lines between city and country were on Jack Cooper’s mind when he named his new band Modern Nature. He took the phrase from the diaries of filmmaker Derek Jarman, written on the coast of Kent in his Dungeness cottage. Visiting Jarman’s home, Cooper was struck by what he calls a “weird mix of urban and rural” - such as the way a nuclear power station sits next to open grasslands.

On Modern Nature’s debut album, ‘How To Live’, urban and rural cross into each other. Plaintive cello strains melt into motorik beats. Pastoral field recordings drift through looping guitar figures. Rising melodies shine with reflective saxophone accents, placing the record somewhere in the Bermuda Triangle between the expansive motorik of Can, the Canterbury progressiveness of Caravan and the burgeoning experimentalism of Talk Talk’s ‘Colour Of Spring’.

Barry says: Having penned a succession of hazy, indie-rock affairs, Jack Cooper (formerly of Manchester's own Trof fame) breaks out a beautiful folky wanderer, heavy on reverb and drifting guitar ambience, but maintaining the melodic leaning that has earned him so many delighted fans. This is beautiful work, and possibly my favourite of his considerable output.