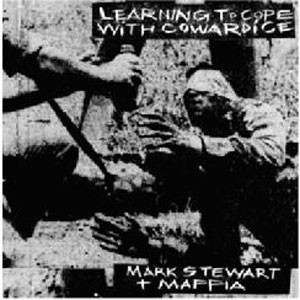 ‘Learning To Cope With Cowardice’, the groundbreaking debut solo album by visionary post punk iconoclast Mark Stewart, is to be given a definitive reissue alongside ‘The Lost Tapes’, a newly discovered cache of unreleased material.

‘Learning To Cope With Cowardice’ is a vital chapter in the legacy of Mark Stewart & The Maffia, a project that would prove to be a revolutionary benchmark for many, from the innovators of the ‘Bristol Sound’ (The Wild Bunch, Smith & Mighty, Tricky, Massive Attack) through to the likes of Trent Reznor and Nine Inch Nails. Collected together this set realizes an expansive restoration of one of Stewart’s most audacious statements. As it was in the early 1980s so it is now, ‘Learning To Cope With Cowardice’ is a masterwork of mutant design and a rude awakening of extraordinary bite.

Mark Stewart himself perceives ‘The Lost Tapes’ as a document that now possesses a storied significance: “It was a real adventure discovering this forbidden history, a twisted tale of Muswell hillbillies, French pirates and a Dutch schizophrenic doctor doing psychic archaeology.” Whilst Adrian Sherwood describes these works as characteristic of a distinct primitivism: “[‘The Lost Tapes’ represent] the early childhood of the songs before Mark and me conducted frenzied, scorched earth, slash-and-burn, twenty hour mental, manic editing sessions at Crass’ studios that led to birthing the finished album.”

Laura says: On his debut solo album, Mark Stewart took the intense, claustrophobic sound of his previous band The Pop Group, and filtered it through the incredible dub infused sonics of Adrian Sherwood's On-U Sound production, creating an album that sounded like nothing else at the time. No in a deluxe reissue format including a bonus disc of Lost Tapes, it still sound amazing.