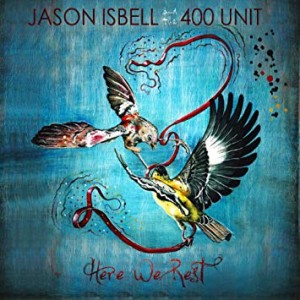 Originally released in 2011. This reissue was remixed by Dave Cobb and remastered by Pete Lyman. Like the two albums before it, Here We Rest shines a light on Jason Isbell’s softer side, illuminating the sad-faced country tunes and bluesy ballads that rarely popped up during his time with Drive-By Truckers. Written in northern Alabama during a break in Isbell’s touring schedule, these songs focus on the archetypal characters that populate most struggling Southern towns: the barflies and ball players, the heartbreakers and the heartbroken, the war vets who return home and the starry-eyed kids who leave. Isbell’s hometown was hit hard by the Great Recession of 2008, and he captures his subjects somewhere between the realization that their lives have been impacted and the sad resignation that they’ve been irrevocably changed. The details are bittersweet, but there’s an air of resilience, too, which Isbell underscores with a sympathetic soundtrack of folk, country, and bar band rock & roll.

Jason Isbell And The 400 UnitReunions

Jason Isbell And The 400 UnitLive From The Ryman