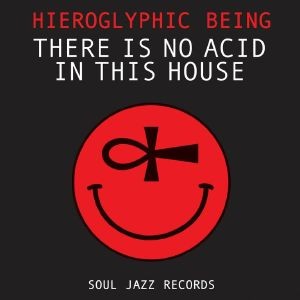 On his new album, Moss once again draws upon the vast scope of experimentation that has defined Chicago’s musical universe over the last half a century - from the birth of house music with the pioneers Ron Hardy, Marshall Jefferson, Lil Louis and others to the radical avant-garde jazz legacy of the city, The Association for the Advancement of Creative Musicians, The Art Ensemble of Chicago and Sun Ra.

Chicago’s musical universe continues to push-further forward today with artists such as Hieroglyphic Being, Angel Bat Dawid, Makaya McCraven, and labels such as International Anthem and Hieroglyphic Being’s own Mathematics, all continuing to explore radical new music while drawing upon the city’s decidedly Afro-futurist lineage.

Jamal Moss remains at all-times a radical one-off musical explorer, a resolute pioneer of an avant-garde dance music aesthetic taking lineage from the founding fathers of acid house such as Ron Hardy and Adonis, and pushing the musical form to its own limits, adding his own harder almost industrial edge to this unique sound, which Moss sometimes describes as ‘Outsider House’ or, referencing the earlier avant-garde musical resident and pioneer, Sun Ra, ‘Rhythmic Cubism’ and ‘Cosmic Be-Bop’.

Hieroglyphic Being’s music crosses many boundaries and has led to remixes of a wide and diverse list of artists, from St Vincent to Hans-Joachim Roedelius (the pioneering German electronic composer and member of Cluster), King Gizzard and the Lizard Gizzard to Adonis and many more. In similar fashion, his music has appeared on Ghostly / Spectral, Warp, Ninja, Axis and his own Mathematics Recordings.

Matt says: Our favourite sonic shaman returns! For new devotees expect - emotive acid, pointillist drum workouts, fried electrics, warped atmospheres and a total merger of machine and mind - taking cues from jazz, industrial and house music along the way. There's no-one else like him, yet he somehow manages to reflect 30+ years of dance music experimentation back at us through his own interplanetary lens. A feast for the ears, one of his best for a while - both a wonderful entry point for newcomers and a completely essential purchase for his existing cult fanbase.