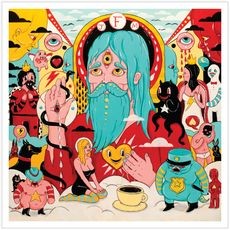 Father John Misty is the nom-de-plume of Josh Tillman, who has been recording and releasing solo albums under his own name since 2003 and who recently left Seattle’s Fleet Foxes after playing drums with them from 2008-2011.

When discussing Father John Misty, Tillman paraphrases Philip Roth: “‘It’s all of me and none of me, if you can’t see that, you won’t get it.’”

‘Fear Fun’, Father John Misty’s album from 2012 and now available again through Sub Pop, began gestating during what Tillman describes as an “immobilizing period of depression” in his former Seattle home, when he had lost interest in songwriting and wound up finding his voice by writing a novel. After breaking from Seattle and settling in a spider-infested Laurel Canyon treehouse, Tillman spent months demoing songs, eventually liberating himself from his creative impasse. With the help of LA producer/songwriter/pal Jonathan Wilson, a wealth of talented musicians kicking around LA and producer Phil Ek (who everyone knows has worked with Built to Spill, Modest Mouse, Band of Horses, Fleet Foxes), ‘Fear Fun’ blossomed into a fully-formed expression of Tillman’s unrestrained vision.

‘Fear Fun’ consists of such disparate elements as Waylon Jennings, Harry Nilsson, Arthur Russell, All Things Must Pass and Physical Graffiti, often within the same song. Tillman’s voice has never been better and often sounds like Roy Orbison at his most joyous, while the music maintains a dark, mysterious yet playful, almost Dionysian quality.

Lyrically, his absurdist fever dreams of pain and pleasure elicit, in equal measures, the blunt descriptive power of Bukowski or Brautigan, the hedonist-philosophy of Oscar Wilde and the dried-out wit of Loudon Wainwright III.

Funtimes In Babylon
Nancy From Now On
Hollywood Forever Cemetery Sings
I’m Writing A Novel
O I Long To Feel Your Arms Around Me
Misty’s Nightmares 1 & 2
Only Son Of The Ladiesman
This Is Sally Hatchet
Well, You Can Do It Without Me
Now I’m Learning To Love The War
Tee Pees 1-12
Everyman Needs A Companion

Father John MistyChloë And The Next 20th Century