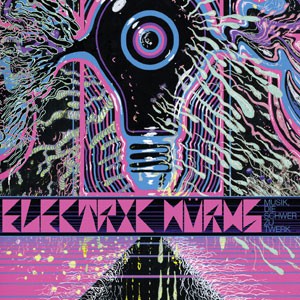 Electric Wurms is the new side-project from Wayne Coyne and Steven Drozd of The Flaming Lips.

This is the first of what could be endless communicated sound stories. It is titled Musik, Die Schwer Zu Twerk, which predicted this modern day dance move by almost forty years ago. Some of it is indeed hard to twerk to but some of it, is not. There is a particular track called Transform!!! that closely resembles a drug fuelled boogie freak rock track by Miles Davis. Another verse Heart Of The Sunrise sounds vaguely like a song by the prog folk group Yes. Of course Yes also turned themselves into space ships so it's no wonder these songs share a similar vibe.

The ensemble leans toward a hypnotic mood for most of the space bible readings. It is a scary truth that we are hearing and then forced to ponder. The pulsating poem Living states… "live as if you were living already for the second time. And that you had acted wrong the first time". So they call themselves Electric Würms after the greatest of the super freaks. But they are not a super-group. They are like Sherpas climbing with you. To help you. To love you. All the secrets that they know they tell you. That's what love is.