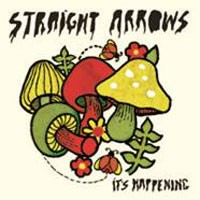 Recorded within the realms of MEDIUM FIDELITY at HANGING TREE - Tim Done's home/studio/archaic equipment museum - using all the 1950s equipment available has resulted in a record where almost all the instruments can be heard. Add in Brent Griffin/SPOD to the mix with his injection of fuzzed out reverberating budget psychedelia and IT'S HAPPENING! was born.

Straight Arrows began with Owen Penglis yelling about getting dumped and kicked out of bands into a four-track cassette. He was soon joined by Alex Grigg, Angela Bermuda and Adam Williams - all friends with colourful musical pasts. Slowly the four honed their reverb-laden, fuzzed out, punk garage into scrappy perfection.

Finding it tough to get shows, Straight Arrows went down the DIY path and decided to put on their own raucous parties at New South Wales' notorious (and now abandoned) gay bar, The Newtown Hotel. Around the same time they put out their first 7" 'Something Happens/Can't Count' on their newly formed label Juvenile Records. Figuring the only way to sell these records (and make their money back) was to force them, photocopied sleeve 'n all, into the hands of drunks and connoisseurs.

Straight Arrows started driving up and down the east coast of Australia, playing parties, warehouses, bars - wherever they could - and in the process gained an outstanding reputation for being "the band that will make you start your own band". By late 2010 Straight Arrows sold out two more 7s, toured with friends Thee Oh Sees, Eddy Current Suppression Ring, The Black Lips, Jay Reatard (RIP) and Ty Segall amongst others and released their debut album It's Happening to a flood of praise, landing them an invite to perform at the Goner Fest in Memphis, Tennessee playing alongside garage punk royalty The Gories. Bands began to queue-up for Owen Penglis to record and produce their music at his home studio and in 2012 Owen produced and recorded the who's who of Sydney / Brisbane Garage scene for the 40th Anniversary tribute album to the seminal Nuggets compilation, originally compiled by Lenny Kaye (Patti Smith band).

Straight Arrows will release their follow up to IT'S HAPPENING! via Agitated later in the year.

Straight ArrowsTurn It Off / Dead And Bored (It Happens Again)