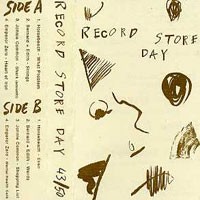 THIS IS A RECORD STORE DAY 2013 EXCLUSIVE, LIMITED TO ONE PER PERSON.

Exclusive tape, produced in conjunction with Common Bar and Piccadilly Records was lovingly put together to celebrate RSD. All the bands on this tape played at Common Bar in Manchester during the day of April 20th 2013. Limited to just 50 hand numbered copies. Featuring  Horsebeach, Bernard + Edith, Jonnie Common and Emperor Zero, two tracks by each band.