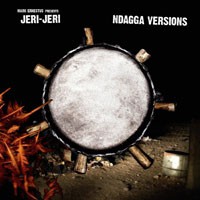 Jeri-Jeri is the collaboration between the renowned Berlin based producer Mark Ernestus and a griot clan of Sabar drummers from Kaolack in Senegal, led by Bkane Seck, along with guest Mbalax musicians and vocalists - including mainstays of the bands of Baaba Maal, Youssou N'Dour and other top Senegalese artists.

Aficionados of cutting edge world music and underground dance will have noted Ernestus's remixes of Afrobeat legend Tony Allen and Kinshasa rockers Konono No 1, and his co-compilation (with Honest jon's) of the critically acclaimed Shangaan Electro showcase. On the quiet though, he has become increasingly hooked on Mbalax wih its hyper-vivid Sabar and talking-drum workouts, and ultra-repetative. sick, sequencer-like Marimba synths. In early 2011 he travelled to Senegaland the Gambia in search of original recordings. Through an unlikely set of coincidences, he ended up working in the legendary Dkar studio former known as Xippi, with more than twenty of the findest musicians in the country.