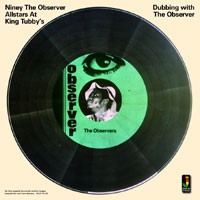 Niney the Observer’s first dub album ‘Dubbing With The Observer’ was cut at King Tubby’s Studio with Tubby himself reworking Niney’s rhythms and adding his magic as only he could do. Niney The Observer (b. Winston Holness, 1951 Montego Bay, Jamaica) by the early 70’s had forged a successful working partnership with singer Dennis Brown cutting some of his best songs adding a more rootsy element to the singers sound. *Songs like ‘Westbound Train’, ‘No More Will I Roam’, ‘I Am the Conqueror’ to name but a few. Also cutting a hit for Ken Boothe ‘Silver Words’ and two other singers that Niney had grown up with, Max Romeo ‘That Was Love’ and Delroy Wilson ‘Halfway Up The Stairs’. It was these tracks and a few other Dennis Brown worked rhythms, that Niney took to King Tubby’s studio at 18 Drumilly Avenue, Kingston 11, with the intention to let Tubby remix and enhance the rhythms Tubby Style. The result was to be Niney’s first Dub album the mighty ‘Dubbing with the Observer’. On completion it was sent to London and it was then released on Trojan records and named Dub album of the Year. We are proud to put that album back out there for all to hear, what has now become a dub classic