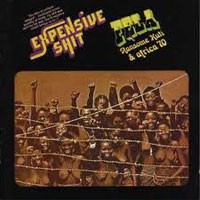 Knitting Factory continues its excellent Fela Kuti reissue series with the release of this disc containing two of Kuti's finest from the 1970s. For He Miss Road and Expensive Shit, Fela still carried his original last name - Ransome-Kuti (which changed to his more radical moniker Anikulapo-Kuti later), but he had grown since his early 1970s albums in two important ways. First, Fela had been radicalized beyond his introduction to US-style black power and had been framed by Nigerian authorities, who placed marijuana in his possession. He promptly ate the dope, after which authorities arrested him and waited for him to defecate so they could test the dung for drugs. Not a sexy scheme, and not even a workable scheme, but it did give Fela fodder - specifically the tune (and album title) "Expensive Shit." His second advance came in the form of using the studio as a virtual instrument, one that makes He Miss Road a trippy, stuttery, reverb-laden intersection of lean Afro-beat and 70s astro-funk. Ginger Baker was at the controls for Road, and Fela shone through the weird studio ambience. Africa 70 was a band given to leaning back into the percussion weave the drummers - led by Tony Allen - laid down. Their inherently languid pacing was enhanced by Baker's studio play, and the results are outstanding.