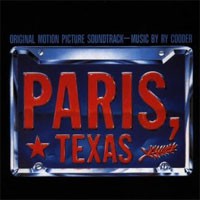 Legendary guitarist Ry Cooder has been performing for over 40 years as a solo artist, soundtrack composer and session musician. He has collaborated with some of the world’s elite including Eric Clapton, Van Morrison, Neil Young and The Rolling Stones, where he guested on their classic albums ‘Let It Bleed’ and ‘Sticky Fingers.’ Ry Cooder’s distinctive score to the 1984 Cannes Film Festival winner ‘Paris Texas’ is very suggestive of the film’s imagery and the desert itself. The title track is Ry Cooder’s most recognisable/popular song that sets the tone for a soundtrack filled with evocative and ringing acoustic guitar.

Darryl says: A hugely evocative and beautiful soundtrack from the legendary Ry Cooder. Stark and meditative acoustic slide guitars - you can almost taste the desert heat.

Paris, Texas
Brother
Nothing Out There
Canción Mixteca
No Safety Zone
Houston In Two Seconds
She’s Leaving The Bank
On The Couch
I Knew These People
Dark Was The Night