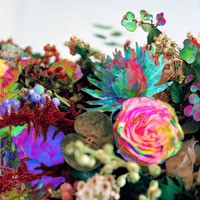 Darkstar first coalesced in the underground, electronic thrum of London’s nascent grime and dubstep sphere in the mid 2000s, growing from attending the now-fabled early FWD club nights to releasing a pair of game-changing 12” singles on Kode 9’s fledgling Hyperdub label. What followed was a fitful and productive period culminating in a discarded album’s worth of tracks, the crucial introduction of vocalist James Buttery to the fold and, finally, the release of their debut full-length ‘North’, to wide acclaim. By this time Darkstar had aptly been framed as a very intriguing proposition, one of the first proper ‘bands’ to rise from the UK’s current electronic underground.

The band decamped to a house in the West Yorkshire countryside, secluding themselves from the distractions of London and writing as a trio for the first time. Ultimately, ‘News From Nowhere’ is a reflection of the time they spent together there. Says Young, “Every place warrants a story. There are moments in people’s everyday lives, no matter how subtle, that can be documented and talked about in great detail. The instances spiral and ascend and take on their own course, altering the perception of how even the slightest change in a day can be felt deeply.”

Eventually proceedings moved from the band’s makeshift digital studio in their house to producer Richard Formby’s (Sonic Boom / Hood / Wild Beasts) dusty studio enclave, full of tape machines and analogue synthesizers. The songs that had been inspired by English prog rock and obscure techno and created as loops based on the band’s affinity for hip hop production (“literally everything from Lex Luger to Geoff Barrow”) grew into sublimely arranged works. In the end, the album arrived at an altogether singular existence, delving into the moments between moments and elevating them to epic, kaleidoscopic heights.