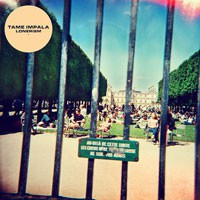 Modular is proud to announce that West Australia’s psych warriors Tame Impala will return with their new album 'Lonerism'.

Again recorded and produced almost entirely by Kevin Parker in studios, planes, hotels and homes around the world, and mixed by the trailblazing Dave Fridmann (Flaming Lips / MGMT), 'Lonerism'’s sound is not so much Tame Impala's sound reinvented as completely redrafted and stretched way, way out. It’s a quantum leap forward for the band, the seeds of which were sown shortly after their debut album ‘Innerspeaker’ was mixed.

Featuring twelve new songs, 'Lonerism'’s most apparent advance is in its synthesizers - there’s swathes of them cutting melancosmic shapes across almost every track. There’s still the searing guitar lines, bouldering drums, free bass and of course Parker’s voice, but now there’s heavily mournful pads and sunshine lead lines from an army of analogue explorers in the mix. This is 60s / 70s psychedelic rock reborn and reinvented for 2012. A future classic!

1. Be Above It
2. Endors Toi
3. Apocalypse Dreams
4. Mind Mischief
5. Music To Walk Home By
6. Why Won't They Talk To Me?
7. Feels Like We Only Go Backwards
8. Keep On Lying
9. Elephant
10. She Just Won't Believe Me
11. Nothing That Has Happened So Far Has Been Anything We Could Control
12. Sun's Coming Up