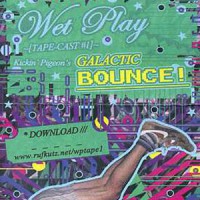 Wet Play is a clubnight based here in Manchester. Loosely described as a 'utopic lifestyle upgrade where good friends meet', their hedonistic parties adopt an open-vibe policy and take adventurers through many sonic realms. They put on Maria Minnerva, Ital, Beautiful Swimmers, Seahawks and Chicago Damn before anyone had even heard of them. This is the first in a series of tapecasts produced by the team; DJ mixes from the crew that highlight some of the sounds of the party. Resident DJ and promotor, Kickin' Pigeon aka Matt Ward (the orange bespeckled house and techno buyer / advisor from this very shop!) debuts the series here. Purveying his 'interstella house' sound, "Kickin' Pigeon's Galactic Bounce" was recorded straight to tape, directly from vinyl records through a fat analogue mixer and is an intergalactic journey through house and techno featuring records from Todd Terry, Rob Hood, Instant House and new cosmic techno cuts happened upon through his time working here at Piccadilly Records. Obviously we're gonna be biased but we think this mix ROCKS. The tape sounds super hot too, but don't worry if you don't have a tape player cos this comes with a fully downloadable version too (supplied via a code on some bespoke, very artistic inlay). If you want a taste of one of the hottest parties in Manchester at the moment, plus an insight into what makes our man here in the shop tick; or if you simply crave a rough-as-a-bears-arse vinyl only house and techno mix with some heavy eq'ing and mixing (think someone who's grown up listening to Derrick May / Jeff Mills / Theo Parrish) then you need this in your life!