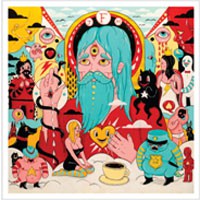 When discussing ‘Father John Misty’, Tillman paraphrases Philip Roth: ‘It’s all of me and none of me, if you can’t see that, you won’t get it’. What I call it is totally arbitrary, but I like the name. You’ve got to have a name. I never got to choose mine.”

He goes on, “‘People who make records are afforded this assumption by the culture that their music is coming from an exclusively personal place, but more often than not what you hear are actually the affectations of an ‘alter-ego’ or a cartoon of an emotionally heightened persona,” says Josh Tillman, who has been recording/releasing solo albums since 2003 and who recently left Seattle’s Fleet Foxes after playing drums from 2008-2011. “That kind of emotional quotient isn’t sustainable if your concern is portraying a human-being made up of more than just chest-beating pathos. I see a lot of rampant, sexless, male-fantasy everywhere in the music around me. I didn’t want any alter-egos, any vagaries, fantasy, escapism, any over-wrought sentimentality. I like humour and sex and mischief. So when you think about it, it’s kind of mischievous to write about yourself in a plain-spoken, kind of explicitly obvious way and call it something like ‘Misty’. I mean, I may as well have called it ‘Steve’”. Musically, “Fear Fun” consists of such disparate elements as Waylon Jennings, Harry Nilsson, Arthur Russell, 'All Things Must Pass', and 'Physical Graffiti', often within the same song. Tillman's voice has never been better and often sounds like Roy Orbison, “The Caruso of Rock”, at his most joyous, while the music maintains a dark, mysterious and yet conversely playful, almost Dionysian quality. Lyrically, his absurdist fever dreams of pain and pleasure elicit, in equal measures, the blunt descriptive power of Bukowski or Braughtigan, the hedonistic philosophy of Oscar Wilde and the dried-out wit of Loudon Wainwright III.

The album began gestating during what Tillman describes as an “immobilizing period of depression”, in his former Seattle home. “Songwriting for me had always only been interesting and necessary because I saw it as this vehicle for truth, but I had this realization that all I had really done with it was lick my wounds for years and years, and become more and more isolated from people and experiences. I don’t even like wound-licking music, I want to listen to someone rip their arm off and beat themselves with it. I don’t believe that until now I’ve ever put anything at risk in my music. I was hell-bent on putting my preciousness at stake in order to find something worth singing about.” He continues, “I lost all interest in writing music, or identifying as a ‘songwriter’. I got into my van with enough mushrooms to choke a horse and started driving down the coast with nowhere to go. After a few weeks, I was writing a novel, which is where I finally found my narrative voice. The voice that is actually useful.”

“It was a while before that voice started manifesting in a musical way, but once I settled in the Laurel Canyon spider-shack where I’m living now, I spent months demoing all these weird-ass songs about weird-ass experiences almost in real-time, and kind of had this musical ‘Oh-there-I-am’ moment, identical to how I felt when I was writing the book. It was unbelievably liberating. I knew there was never any going back to the place I was writing from before, which was a huge relief. The monkey got banished off my back.”

Tillman brought the demos to LA producer/songwriter/pal Jonathan Wilson, and in February 2011 began recording at his home-studio in Echo Park. “Initially, the idea was to just kind of recreate the demos with me playing everything, since they were pretty fleshed out and sounded cool, but a place like LA affords you a different wealth of talent, potential, etc than just about anywhere else. I realized what was possible between Jonathan’s abilities, and the caliber of musicians that are just hanging around LA, pretty quickly. People were coming in and out of the studio all day sometimes, and other days, it would just be Jonathan and I holed up, getting stoned, and doing everything.

“I was honest with myself about what music actually excites my joy-glands when I was considering the arrangements and instrumentation,” says Tillman. “As opposed to what’s been enjoyable to me in the past – namely, alienating people or making choices based what I think people won’t like or understand. Pretty narcissistic stuff.”

When asked about Laurel Canyon, where he eventually ended up living in the aforementioned tree-house with a family of spiders, Tillman says, “My attitude about it all is pretty explicit in the record. Given my pretty adversarial personal attitude about the music and aesthetic that comes from that place, it’s kind of a huge joke that I live in a former hippie-fantasy land. I have a really morbid sense of humour.” Phil Ek (who everyone knows has worked with Fleet Foxes, Built To Spill, Modest Mouse, Band of Horses) heard the rough versions of the album in May 2011 and offered his services to mix. “Phil and I have known each other for a while by virtue of Fleet Foxes, so he was familiar with my music, but we had never discussed working together. I think he immediately recognized the shift in my writing and singing from a producer and friend’s standpoint. His excitement is really evident in mixes, I think.”